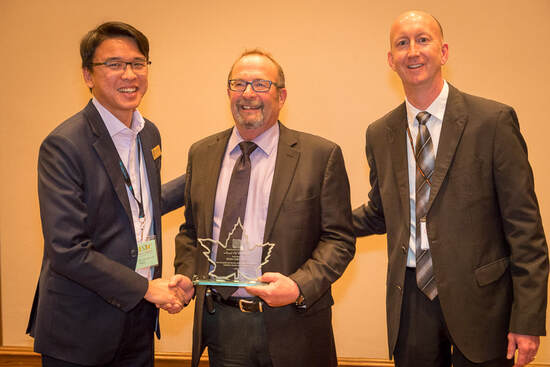 Francis [Frank] Dunnigan’s musical education began at 5 years of age, studying as a young violin student with Ranald Shean. From this humble beginning, he went on to earn an Associate Degree in Violin Performance, a Bachelor of Education degree from the University of Alberta, and a Master of Music degree from the University of Oregon. At 16 years of age he embarked on his 60-year career as a professional musician, becoming a violinist with the Edmonton Symphony Orchestra (ESO) while continuing to maintain his position as violinist with the Edmonton Youth Orchestra. In the 20 years that he played violin with the ESO, his role went beyond violinist to include Principal Second Violin and Assistant Concertmaster.

Performances as a professional violinist also included engagements with ballet and opera orchestras; an ITV Concert Series featuring performers such as Tom Jones, Sergio Mendez and Harry Belafonte; the Calgary Philharmonic Orchestra; Ice Capades; Moscow Circus, and musical theatre. In addition to these performances as a professional violinist, his level of mastery of the horn, bassoon, trombone and viola gained him acceptance into several university-level ensembles including the University of Alberta and Oregon Concert Bands (trombone and horn), Edmonton Youth Orchestra (bassoon) and Concordia College Symphony.

Mr. Dunnigan began his conducting career in 1963, conducting the University of Alberta Symphony Orchestra while studying as a student at the University of Alberta. He went on to study under respected and well-known conductors including Frank Battisti, Eugene Corporon and Robert Wagner.
His conducting career has been broad and diverse, encompassing orchestras, concert bands, musical theatre, and chamber groups with players ranging in age and ability; young students, adult amateurs, university students and professional musicians. These ensembles have included such groups as the Edmonton Catholic Schools All City Band, musical theatre at Festival Place (My Fair Lady in 2005, The Sound of Music in 2006), the Easter pageant Love According to John, the Faculty of Education Band, summer music workshops, the Concordia Symphony Orchestra and an opportunity to conduct the Edmonton Youth Orchestra.

Of the many groups he has conducted, the group with which he has become most synonymous is the Edmonton Catholic Schools Senior All-City Band. Members of the music community who know Mr. Dunnigan have been heard to refer to this ensemble as “Frank’s Band.” His initial involvement was a crucial element to its inception.

In 1967, when music programs throughout the Edmonton Catholic School District were just beginning to grow and develop, Mr. Dunnigan identified a need to provide opportunities for enrichment to high school music students and mentorship to music educators within the school district. As a result, the Edmonton Catholic Schools Senior All-City Band was formed in 2007. The ECSSACB celebrated its 40th anniversary and continues to provide enrichment and mentorship to students and teachers.

The reputation and accomplishments this group has achieved over its 48-year history have gained name recognition for the group not only locally within the school district and city of Edmonton, but also at music festivals within and outside of Alberta (Edmonton Kiwanis Music Festival, Alberta Band Association Festival in Red Deer and Unifest in Saskatoon). Over the years, the Edmonton Catholic School All-City Senior Band has consistently achieved superior marks at these and other music festivals. It has received numerous invitations to play at festival concerts as a result of its high calibre of performance during competitions. The band is featured at the Edmonton Catholic Schools annual Celebration of the Arts and played during the Queen’s royal visit in May 2005.

Many of the students who have played under his direction have gone on to be successful in a variety of musical careers including professional musicians, music teachers, consultants, university professors, recording artists, and recording and musical instrument repair technicians. Many have attributed their appreciation of music and inspiration to pursue musical careers in part to what they learned and experienced while playing with this band.

Mr. Dunnigan’s love of music and desire to instill a love of music and accomplishment in his students is evident in the dedication and commitment he has demonstrated through the many volunteer hours he has devoted to the organization, planning, administration and leadership of this prestigious group. The values and importance he instills in developing musicianship, musical expertise and musical appreciation are evident in the locally developed course curriculum for band that he developed in collaboration with the Edmonton Catholic School District Secondary Music Consultant and that was approved by Alberta Learning in 2005.

Mr. Dunnigan has been actively involved with both the provincial and national band associations, holding executive and board positions. His strength as a leader combined with his dedication, knowledge and passion to provide opportunities for students to learn and develop as musicians, have impacted his contributions to the development and growth of band programs within Alberta and Canada.

Throughout his career as musician and music educator, Mr. Dunnigan has shared his expertise and love for music with developing musicians of all ages. He has held a variety of teaching, conducting and consultant positions in school districts, colleges, universities, government and professional associations, and has provided mentorship to other conductors by adjudicating at music festivals.

Even in his retirement, he continues to be actively involved in teaching, conducting and adjudicating in the Edmonton area, working with a range of individuals from young musicians just starting their band experience in junior high to mentoring established performers such as university students or professional musicians.

As a result of his vast knowledge of music literature, experience as a band conductor and artistic ability to interpret music, he is able to challenge players to aspire to be the best they can be; more importantly, to lead them, regardless of age or ability, to a true appreciation and understanding of the music they create and perform.

Mike Achtymichuk did not pursue music as a career, but rather as a diversion and a form of relaxation. As a young man, he developed an interest in music and formed a local dance band with his brothers. He pursued more formal musical training at the Navy Music School in Victoria, BC, then later after three summers of study in the Alberta Band Directors Training Course he graduated with a Community Band Director’s Certificate. His life as a band director began in 1953 in Waskatenau, AB, where he founded and directed the community concert band. In 1966, he and his family moved to Lacombe where he founded the Lacombe Lions Community Band. He was one of the founding members of the Central Alberta Band Directors Association in 1951, and this organization grew into the Alberta chapter of the Canadian Band Association and later became the Alberta Band Association as we know it today. He was also responsible for the formation of several provincial band festivals, including the Alberta Band Association Festival of Bands and he was the founding president of Phi Beta Mu in 1978 and has served on the executive continuously since that time. He is now retired and living in Red Deer, but music still remains a strong focus in his life and he is still an enthusiastic supporter of band education.

Michael Eddy earned a Bachelor of Music in Theory and Composition from the University of Western Ontario and an Associate in Piano Performance and then in 1974 started teaching music in Kitimat, BC, and then taught in Ft. McMurray for twenty-two years. Mike has previously served as a board member and vice-president on the Alberta Band Association. His Concert and Stage Bands maintained consistently high standards. His Senior Concert Band received the "Most Outstanding Band" at the ABA Festival of Bands and Superior and first place standings at international festivals. He spent three summers as a conductor and instructor at Musicamrose. He twice received Alberta's "Excellence in Teaching" award, the most recent being one of the twenty provincial awards. In 1998 he was Alberta’s Band Director of the Year. In 1984 he was chosen Citizen of the Year, Kitimat, BC and in 2000 he was chosen as Distinguished Citizen of the Year for Fort McMurray.

Barry Valleau is a retired school band teacher living in Didsbury, AB with his wife Carol. He began his musical career completing six years in the Canadian Military bands before attending the University of Calgary to obtain his B.Ed with a music major. His first eleven years were in Sexsmith, AB and he finished his twenty-seven year career in the Didsbury area. Through the years, Valleau's bands did very well at the local, provincial and national levels with Valleaureceiving numerous personal awards including the Tommy Banks, the John Phillip Souza, the Band Director of the Year (The Elkhorn Award) and the Outstanding Director Award from the CBA (Canadian Band Association). Since his retirement in 2000, he is kept very busy as a clinician for band camps and adjudicating at festivals. Barry and Carol spend three months each winter in Mexico where they take music instruments (donated by colleagues throughout the province) to the Puerto Vallarta Junior Orchestra School. To date (with the help of friends and family as 'mules') they have taken thirty-six brass and woodwind instruments. Mr. Valleau plays trumpet with the Puerto Vallarta Orchestra while in Mexico.

Joyce Howdle began studying clarinet at an early age first with Colin Brady and then with Jan Bus in Edmonton. She competed in many local and provincial music festivals and was “Grand Award Winner” as well as Provincial Woodwind Solo award winner for 16 years and under and then 19 years and under respectively at the Alberta Provincial Music Festivals. Joyce completed her ARCT (Toronto) and then her Licentiate Degree from Trinity College, London, England in clarinet performance before attending the University of Calgary where she studied with Stan Finn and Bill Thomas.
After completing her music degree, Joyce taught school music and then moved to Red Deer where she was the Visual & Performing Arts Coordinator with the School of Continuing Education at Red Deer College. Recently retired,  Joyce continues to teach clarinet at Red Deer College and maintains an active clinic, workshop and adjudication schedule.  She has coordinated the Alberta Band Association Provincial Festival of Bands for most of her career at RDC and plans to continue in that capacity.